As an ancient island for the Aboriginals and center for traditional craft, Elcho Island serves as the area for immersion. Located in a place of lush natural beauty, where the beaches sit surrounded by deep-red cliffs, discover an untouched beauty.

Elcho Island, also known as Galiwin’ku by its traditional owners, is an island off the shores of Northern Territory. It is located 150 km west of Nhlunbuy and at the southern end of the Wessel Islands group. This is the second largest and the most remote Aboriginal community in the Northern territory. Hosting a population of 2500 people, most are Aboriginal residents of the community, speaking up to 22 different dialects. Elcho Island was also the home of the late folk musician Geoffrey Gurrumul Yunupingu and actor Baykali Ganambarr. The Galiwin’ku community was established in 1942 as a refuge from possible bombing of the Milingimbi Royal Australian Air Force Base in 1942, and the Methodist Church arrived in 1947. The Market Garden was established, pushing the cypress pine logging and sawmill industry. The original mission was to encourage Aboriginal people to stay on their traditional lands, and ended when self-government came in the 1970s. Numerous clan groups now live in Galiwin’ku, most prominently the Yolngu people. Traditional owners share residency and divide the estates. The East Arnhem Regional Council provides the government in Galiwin’ku. Some points of interest include the Elcho Island Arts, an art center for the display and sale of traditionally made art. The island is also known for its Elcho Island Dancers, the Djuki Mala Dancers who performed a routine to Zorba the Greek. Ancient coins have also been discovered on the island. Ready to land in the Elcho Island Airport yet?

How to get to the Elcho Island

Darwin (1½ hours + 30 minutes stop in Maningrida): Airnorth flies a return service to Elcho Island, via Maningrida, every day except Sunday

Park maps with marked points of interest and destinations 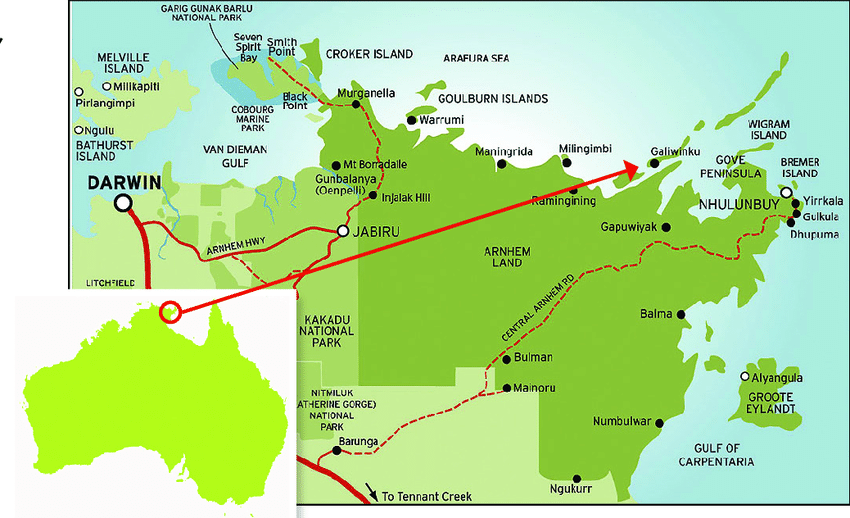 When to visit ELCHO ISLAND?

Elcho Island is open all year round. Permits may be required for any person visiting the community including activities such as fishing, camping and visiting certain beaches.

Prior to the arrival of Europeans, Elcho Islanders and other Yolngu living along the coastal edges of Arnhemland had regular contract with sea traders passing through the great trading route between China and Europe. In the 17th Century Dutch, Portuguese and Spanish are known to have charted the Arnhemland coast. Galiwin’ku was established with the arrival of Harold Shepherdson, a lay associate of the Methodist Overseas Mission, from Milingimbi in 1942. It is the service centre for several traditional tribal homelands, which were encouraged during the early settlement in order to retain the traditional way of life.

The Galiwin’ku Community Inc. is the local government authority responsible for provision of most community services. The Council is comprised of representatives of each clan group that live at Galiwin’ku. The Council pursues policies that reflect pride in Yolngu traditions, culture and the community, together with self-determination, empowerment and local management. The Council’s mission is to deliver services that will provide protection to people and create a healthy environment where residents can enjoy a quality of life and opportunities for self-advancement. The Council also adopts the advocacy role for the community in the wider Australian context.

What you can do at Elcho Island

What to pack for this park’s visit?

Day trip information (How long will hikes take? Where to park?)

Parking is available in front of Galiwin’ku Visiting Contractors Accommodation

There is a Police Station on Elcho Island. The Galiwin’ku Night Patrol self-polices the community by vehicle to prevent crime and anti-social behaviour and/or offer a safe transportation service to a place of safety for those at risk. The Night Patrol staff assists the people of Galiwin’ku; checking around the community for trouble; talk to troublemakers and their families and sorting out trouble in a community Aboriginal way. If the trouble continues, they talk with Council about calling police for assistance. Night Patrol staff receives training in development of Common Night Patrol protocols and practices. The workshops are organised and run by the NT Police, Fire and Emergency Services. Night Patrols allow the Council to concentrate on the major issues, rather than become involved in community disputes.

This is a shrub or small tree that grows in coastal saline or brackish water. They are ancient species with fossils dating to 75 million years ago. There is often interest in restoring mangroves as they protect areas with extreme weather events.

Also known as wattles, they are a large genus of shrubs and trees in the pea family. It is said that they evolved their fire resistance about 20 million years ago, and are present in a variety of different terrestrial habitats. The Aboriginal have traditionally harvested seeds of some species and grinded into flour for food.

Corellas are white cockatoos with 6 total species. They all have pale bills with yellow-tinged underwings and some red to the face. There is a famous Corella named Ngarritj on the island, who can speak different Aboriginal languages and knows his way around Elcho Island.

There are no gasoline available on the island, one must use low-aromatic petrol “Opal” as a fuel substitute

Alcohol is not allowed, even for visitors We’d love for you to join our love of the NT by following us.💚

Time spent on the beach is never wasted! 📸: @a

Some places leave you speechless. Elcho Island is

A little known way to relax on an island, go to th