Mandorah, neighboring Wagait Beach and known for fishing, the beautiful settlement serves as your favorite resort on water.

Mandorah is a locality in Northern Territory, with its local government area in Wagait Shire. Located 8 km from Darwin and extending over 1.179 square kilometers, Mandorah still holds a population of 0 residents. Despite its exclusivity, Mandorah continues to be an ideal tourist destination for both campers and those interested in fishing. Mandorah hosts the amazing Wagait Beach, a tropical beach offering exorbitant shells and golden beaches. Shade is provided by the Casuarina trees, offering resting areas to all visitors. Mandorah is also an ideal area for fishing, as the waters are pristine and generally untouched, with fishes such as mackerel and tuna within the casting area. Mandorah also offers a World War II wreck site, where one can visit for the atmospheric feel and learn of the history. Six American lives were lost at the site, and the site displays a plane that crashed during the war. Some other historic sites include the Charles Point Lighthouse, being the oldest lighthouse in Northern Territory. It is where numerous ships approached Port Darwin in 1880, built to prevent wrecks. There are also a variety of accommodations for visitors, despite being quite an isolated area. Visitors may enjoy meals offered at Wagait Beach shops and stay at a variety of holiday resorts.

How to get to Mandorah

Park maps with marked points of interest and destinations 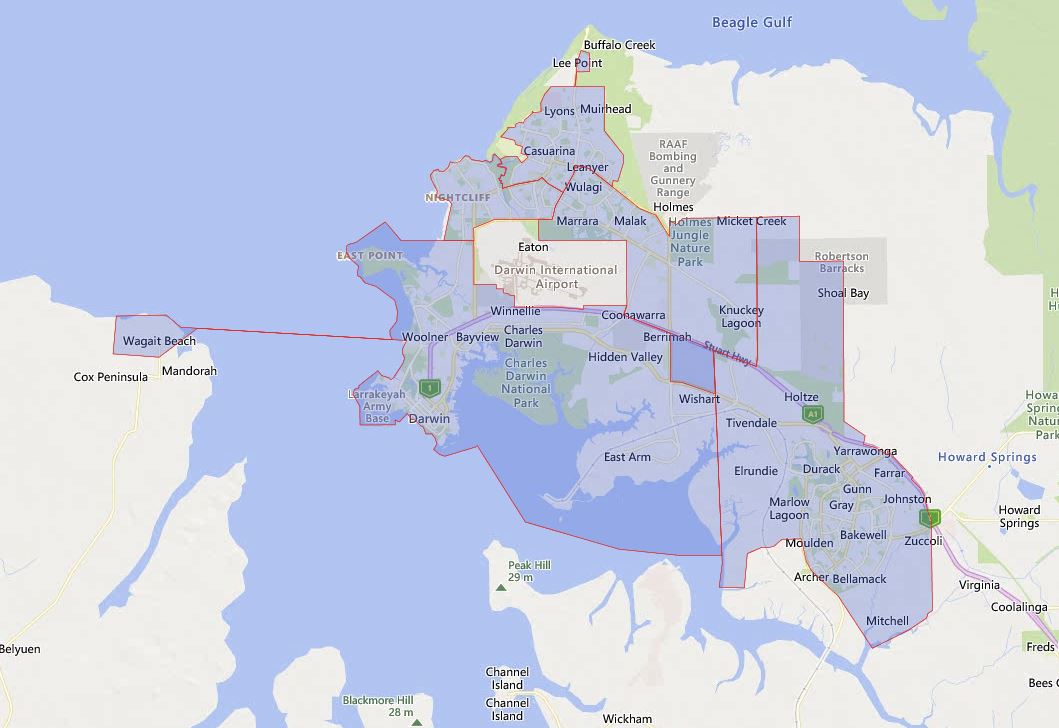 What you can do at Mandorah

Wagait Beach is not big to explore. But there are some remarkable sites that are worth a visit. Along the coastline are remains and evidence of the location’s World War II strategic importance. There is a gun tower and placements at the beach access from Wagait Tower Road with story boards, and more ruins of gun placements on the beach walk east from Wagait to the Jetty. In the forest with signed access from Charles Point Road are the remains of the Milady, and American bomber which crashed in 1945, with story boards telling the story of the ill-fated plane and her crew. There’s also the widely strewn remains of a crashed Japanese ‘Betty Bomber’ which didn’t make it home from the infamous Bombing of Darwin.

What to pack for this park’s visit?

Walking along the beach, you may be lucky enough to spot the occasional dolphin, dugong or even seasonal manta rays. During the dry, turtles come ashore at night to lay eggs. Parks NT do an annual turtle hatchling release here, check their website to register attendance. Just walking around is a bird watcher’s treat, with flocks of diverse forest parrots, wetland birds and numerous marine birds flying over the waves. At night you may hear the howl of the area’s many pure bred dingoes, and in the morning see a croc sunbathing on beach rocks. Some common animals you may find in the area include:

Dingo: Dingo is a medium sized canine that excels in speed, agility, and stamina. The three main coat colors are tan, black/tan, or creamy white. The name derives from the Dharug language used by the Aboriginal population

Manta Rays: Manta Rays are large rays found in temperate and tropical waters who rely on their filters to eat large quantities of zooplankton. They are horn shaped with a giant forward facing mouth, and a large brain. They are currently listed as vulnerable by the International Union for Conservation of Nature.

Dolphins: Several species of dolphins can be found in coastal regions of Northern Australia: the snubfin, Indo-pacific humpback, and the Indo-pacific bottlenose dolphins.

When you visit the area, please be aware that: What treasures have you found while exploring Mand

Take some time to explore the beach.⛱️⛱️

Darwin sunsets from Wagait beach are always the be